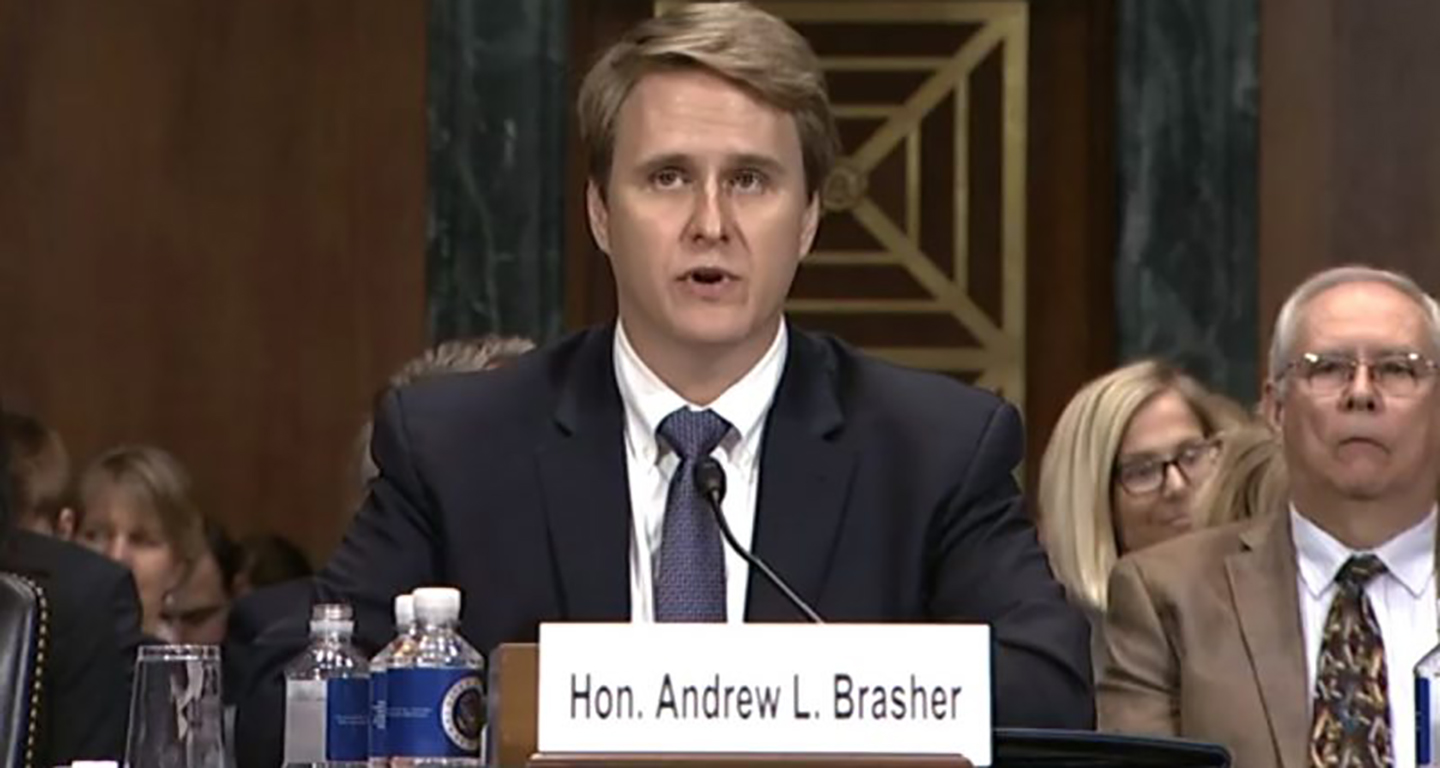 With Trump’s impeachment, Senate should not even consider Brasher nomination

WASHINGTON, D.C. (January 14, 2020) -- Leading national, state and local racial justice organizations today called for the Senate to reject the nomination of Andrew Brasher to the Eleventh Circuit Court of Appeals, the federal appellate court for Alabama, Georgia and Florida. The move comes as the Senate Judiciary Committee announces it will vote on the Brasher nomination this Thursday. Last week, a coalition of 29 advocacy organizations sent a joint letter to Senate Majority Leader Mitch McConnell and Senate Judiciary Chairman Lindsey Graham, calling on them to halt the confirmation process for Donald Trump's federal judicial nominees now that the president has been impeached and faces a trial in the Senate.

Andrew Brasher, a 38-year-old from Alabama, was confirmed to the Middle District of Alabama last May in a narrow 52-47 vote. Just six months later, Trump announced his nomination to the Eleventh Circuit. Trump has already appointed five judges to this 12-member court. If Brasher were to be confirmed, Trump will have appointed half of this bench.

“Andrew Brasher is an extreme example of Donald Trump’s weaponizing the bench to suppress the vote. Brasher has the worst voting rights record of any Trump appellate nominee. His confirmation would be a lifetime strike against our democracy. We cannot allow Judge Brasher to preside over millions of Black and Brown residents of the Deep South who depend on the federal courts to fully participate in our democracy. As we celebrate the 55th anniversary of the Voting Rights Act, we must re-dedicate ourselves to fighting for judges who will protect our most successful civil rights law, not eviscerate it. The NAACP will fight this nomination with everything we’ve got,” said Derrick Johnson, President and CEO, NAACP.

“Andrew Brasher's nomination to the Eleventh Circuit Court of Appeals represents yet another example of the Trump administration using the judiciary to undermine civil rights in this country," said Sherrilyn Ifill, President and Director-Counsel of the NAACP Legal Defense and Educational Fund, Inc. (LDF). "Mr. Brasher's egregious voting rights record during his tenure as an Alabama state official, when he actively worked to undermine key provisions of the Voting Rights Act of 1965 and defended Alabama's flagrant attempts to racially gerrymander legislative districts, should be disqualifying. But, to the contrary, this record places him alongside a coterie of Trump judicial nominees with a demonstrated hostility to civil rights. The United States Senate should take seriously its obligation to guard the independence and integrity of the federal courts and refuse to confirm Brasher to a lifetime appointment as a federal judge."

“It is exceedingly inappropriate for the Senate to consider lifetime nominations while a president is under the cloud of impeachment,” said Vanita Gupta, president and CEO of The Leadership Conference on Civil and Human Rights. “Yet Majority Leader McConnell and Senator Graham are so determined to transform the federal judiciary and roll back the progress we have made on civil and human rights, they are rushing forward with Andrew Brasher’s nomination to the Eleventh Circuit. This court frequently decides critical civil rights cases that affect millions of people, from voting rights to health care access. It is appalling that Brasher, who has spent much of his career undermining the civil rights of Alabamans, is being considered for this critically important position. It is incumbent upon senators to put a stop to this, protect the right to vote, and take their duties seriously.”

“The elevation of Andrew Brasher to the 11th Circuit would be a civil rights travesty for people of color who reside within its jurisdiction. Among its sitting judges, the composition of the 11th Circuit is 90 percent white, while the population is comprised of 45 percent people of color. The National Urban League is calling upon the Senate to soundly reject his nomination. Brasher is the latest in a long line of judicial nominees by this President with an ultraconservative, anti-civil rights ideology. The National Urban League is deeply concerned about Mr. Brasher’s record with respect to access to voting and justice for persons of color. Brasher’s alarming anti-civil rights record provides no assurance that people of color would receive justice in his court. We believe that there are amply more qualified, balanced and fair nominees that can be elevated to the 11th Circuit,” said Marc H. Morial, President and CEO, National Urban League.

“Alabama is the birthplace of voting rights. It is inconceivable that someone with an atrocious voting rights record like Andrew Brasher would be nominated to the Alabama seat on this powerful circuit court. The Brasher nomination is an insult to Selma, its heroes, and everything they stand for,” said Benard Simelton, President, Alabama State Conference of NAACP.